Unmasking of the AntiFa Bill HR 6054 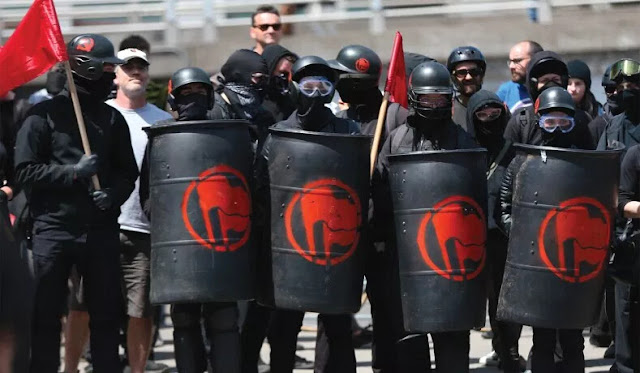 H.R. 6054
To amend title 18, United States Code, to provide penalty enhancements for committing certain offenses while in disguise, and for other purposes.

IN THE HOUSE OF REPRESENTATIVES
June 8, 2018

Mr. Donovan (for himself, Mr. King of New York, Mr. Budd, and Mr. Gosar) introduced the following bill; which was referred to the Committee on the Judiciary

A BILL:
To amend title 18, United States Code, to provide penalty enhancements for committing certain offenses while in disguise, and for other purposes.

Be it enacted by the Senate and House of Representatives of the United States of America in Congress assembled,

SECTION 1. Short title.
This Act may be cited as the “Unmasking Antifa Act of 2018”.
SEC. 2. Interference with protected rights while in disguise.

(a) In general.—Chapter 13 of title 18, United States Code, is amended by inserting after section 249 the following:

“§ 250. Interference with protected rights while in disguise:
“(a) In general.—Whoever, whether or not acting under color of law, while in disguise, including while wearing a mask, injures, oppresses, threatens, or intimidates any person in any State, Territory, Commonwealth, Possession, or District in the free exercise or enjoyment of any right or privilege secured to him by the Constitution or laws of the United States, or because of his having so exercised the same, shall be fined under this title, imprisoned not more than 15 years, or both.

(b) Clerical amendment.—The table of sections for chapter 13 of title 18, United States Code, is amended by inserting after the item related to section 249 the following:

“250. Interference with protected rights while in disguise. ”.

SEC. 3. Destroying buildings or property within special maritime and territorial jurisdiction while in disguise.

Section 1363 of title 18, United States Code, is amended by adding at the end the following: “Whoever, during the commission of an offense under this section, wears a disguise, including a mask, shall, in addition to any term of imprisonment otherwise imposed under this section, be imprisoned for 2 years.”.

OpEdit: (CNN): A new bill, H.R.6054, with intentions to send the powerful message to remove masks from Antifa activists in protests, or will be jail time for 15+ years.

This bill, was introduced by Republican Rep. Dan Donovan of New York in June, has drawn widespread condemnation from critics who claim it unfairly targets Antifa activists, while it could embolden the far-right demonstrators Antifa protests against.

CNN is Now Playing along with Unmasking the leftist, kissing up to POTUS45, Donald j. Trump. His administration appears to be laying on their backs waiting things out, waiting for something, but what is this event they are waiting for?

Our U.S. Antifa activists could be jailed for up to 15 years for their masks, so perhaps they will wear "hijabs"?

Most of AntiFa is transgender, LGBT, and more the like minded, and many of same like life-styles. What is my answer?

Hijabs, yes, do it, I love this idea, all AntiFa must wear HiJabs.

Antifa live at home with Mom's and or Dad's, are all about radicalization, and they enjoy wearing masks at protests, carrying knives, loaded-long guns and guns, home-made pepper tear-gas and far more.

AntiFa known to have beaten women and children to death with base-ball bats have ignited congress and senate to stop this activity.

Under this bill introduced by a US congress, will destroy another fabric of Communist-Socialist power grab throughout United States and perhaps the entire earth.

If passed, H. R. 6054, this bill will legislated anyone wearing a mask or disguise who "injures, oppresses, threatens, or intimidates" someone else exercising a right guaranteed under the Constitution freedoms will be imprisoned.

The title of the bill -- "Unmasking Antifa Act of 2018" -- makes it clear that Antifa activists are its intended target, but the bill's text never explicitly mentions them.
What is Antifa?

"This is another draconian measure to actually criminalize dissent in the United States," said Scott Crow, a former Antifa organizer and author.

"Because the law, even if it doesn't explicitly state 'leftists who mask up,' that's who the largest potential target of the law is," he said, "far more than white nationalists."


The term "Antifa," short for "anti-fascist," is used to refer to a loose coalition of individuals with left-leaning political views that often fall outside of the mainstream Democratic Party's platform.

The group has no figurehead or official governing body, but members -- some of whom turn to radical or militant tactics to make their views known -- generally oppose the inequality of wealth by corporations and discrimination against marginalized communities. They often wear black and obscure their faces while protesting.
- Schiff on Antifa: 'No justification' for violence 01:53

The Antifa movement's profile has significantly risen in recent years, especially after members clashed with self-described "white nationalists" in Charlottesville, Virginia, last summer -- a day that ended in tragedy when a James Alex Fields Jr. allegedly drove a car into a crowd of counter-protesters, killing one demonstrator, Heather Heyer.

"Instead of dealing with that, they'd just rather deal with this," he said, "which is to put a band aid on something."

Walter Shaub, the former director of the Office of Government Ethics, tweeted about the bill on Tuesday, suggesting it advanced "authoritarianism."

"Two groups go to Charlottesville. A big group chants racist filth, wields semi-automatic assault rifles, fires a gun into a crowd & murders a woman with a car," he wrote. "A small group wears masks. It's the small group these Congressmen want to lock up for 15 years. Authoritarianism rises."

Donovan's office sent out a fact sheet that pointed out other instances in which Antifa activists exhibited violence, including an instance in February 2017 where they turned up to protest at a speaking event held by right-wing commentator Milo Yiannopoulous at UC Berkeley.

Donovan's spokesman Patrick Ryan also pointed out that the bill would simply add a section to federal civil rights statutes to include a penalty for wearing a mask.

"My bill expands upon long-standing civil rights statutes to make it a crime to deprive someone of Constitutionally-guaranteed protections while masked or disguised," Donovan said in a statement sent to CNN.

"Americans have the natural right to speak and protest freely; it is not a right to throw Molotov cocktails and beat people while hiding behind a mask."

But regardless of whether the bill becomes law, Crow said it won't stop protesters from wearing masks.

"If they take away the right to mask up," he said, "people will still do it anyway to fight against authoritarianism in any form."
Posted by Crypto Researcher on Thursday, July 12, 2018